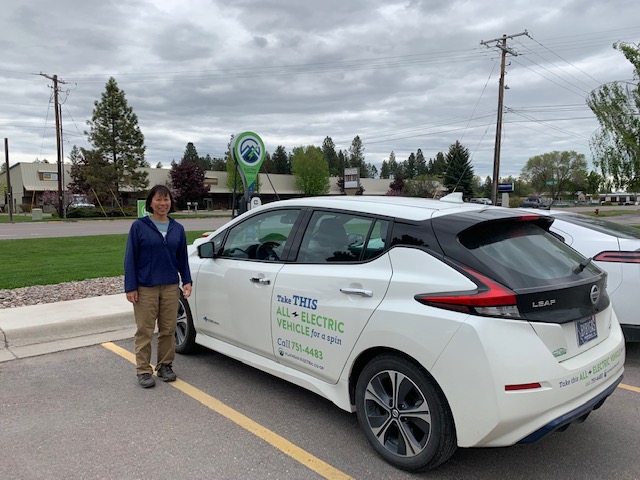 We got to borrow Flathead Electric’s electric vehicle “Eve” over the weekend of May 17-20, 2019. The 160-mile range was a lot more than I thought Nissan Leafs had*, which was a pleasant surprise when we first met Eve on a Friday afternoon. We woke up on Saturday to a cool, drizzly day that seemed perfect for a drive. We thought we could probably take her for a drive around Flathead Lake. By the time we reached Lakeside, though, it was clear that the mileage displayed on the dash was for city driving, since it was ticking down faster than the actual road miles. Pretty soon we had turned off the radio and fan and even the headlights (when it wasn’t raining) to conserve energy. When we got to Polson, we stopped first at the public library to ask about a place to charge, noting that the library also had a receptacle near a side door, which we were definitely going to ask about. We also knew we would be going back to Kalispell along the east side of the lake, which is shorter—and hopefully short enough, since we were down to 80 miles of charge left. The people at the library didn’t know of any charging stations, and also told us they had recently disconnected the electricity to the receptacle we’d seen because of people poaching their power. That didn’t bode well for finding any other place to plug in, even for the time we’d be eating lunch and wandering downtown Polson. Before we left a few hours later, I’d texted a friend in Bigfork, warning her that we would likely be stopping by to visit while we plugged in to ensure we’d make it back to Kalispell. After a short stop at the Cherry Blossom Festival at Yellow Bay we did charge Eve for an hour in Bigfork. We only gained 9 miles (!) of charge in that time, but we were confident we’d get home. We did, however, drive straight back to the FEC offices to plug her in for the night to “fill” up! I think we had 10 or 12 miles to spare at the end of the day. The rest of the weekend, Eve got driven around town for errands, which was normal and not anxiety-inducing.

* The Chevy Volt had a battery range of about 50 miles, which is what I thought was the range of all (non-Tesla) EVs. Interestingly, I just read about why the Volt was discontinued this year:  Customers apparently didn’t want or need the extra weight of the backup gas engine and were getting over range anxiety.