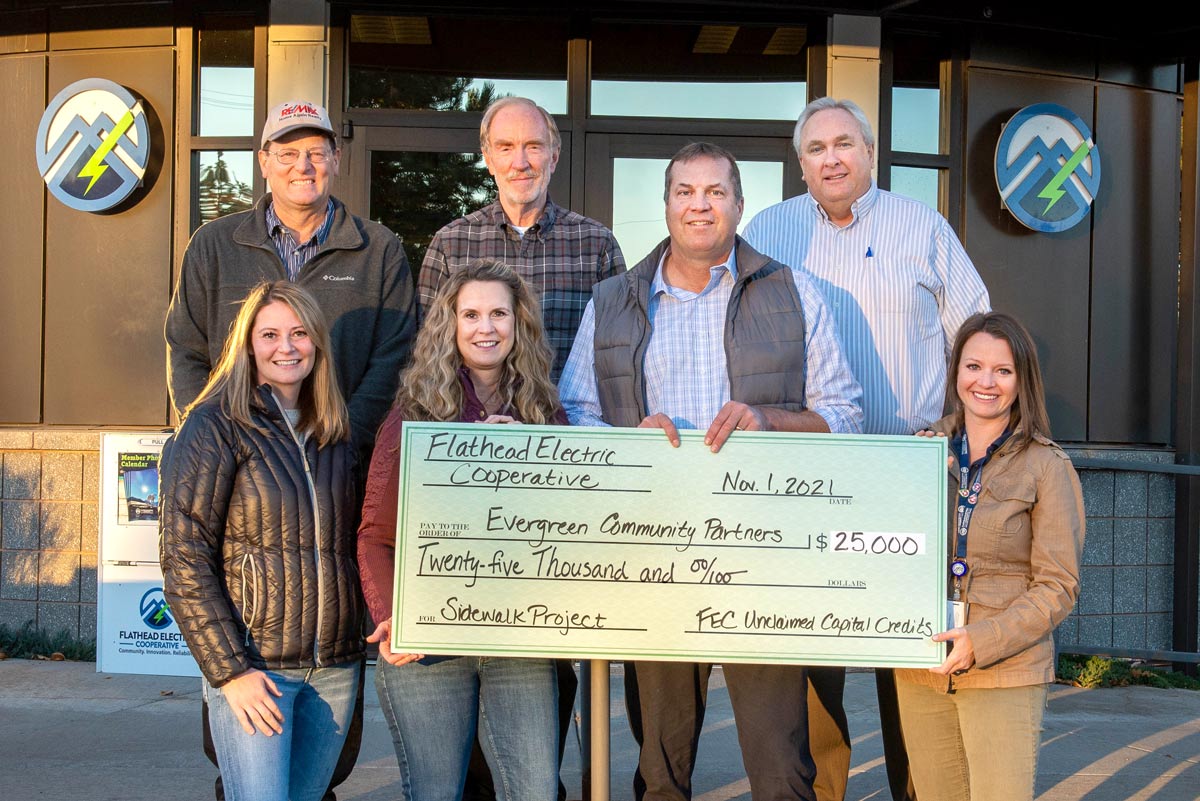 Flathead Electric Cooperative’s (FEC) Board of Trustees has awarded a $25,000 grant to Evergreen Community Partners to fund the Highway 2 Sidewalk Project in Evergreen.

The Co-op’s gift follows the good news earlier this month that the community match requirement to fund the first phase of the project was met by a donation from the Trailhead Church in Evergreen. Phase 1 includes building a sidewalk from Hwy 2 East between Hwy 35 and Evergreen Drive on both sides of the highway and north to Meadowlark Drive on the West side of the highway.

FEC’s gift will serve as the seed money for the fundraising effort for Phase II of the project which will extend the sidewalk from the west side of Hwy 2 onto West Evergreen Drive.

Evergreen Community Partners Board President Darla Harmon says both phases are critical for the safety of the Evergreen students.

“In addition to Highway 2, West Evergreen is also an extremely dangerous road for the kids who must navigate the very narrow road on their way to and from school, sharing the road with fast moving vehicles,” says Harmon. “West Evergreen also has some significant challenges due to ditches, the railroad tracks, a bridge, and power poles that transfer from one side of the road to other. We are so grateful that Flathead Electric Co-op stepped up to the plate to get the ball rolling on this piece of the project.”

FEC General Manager Mark Johnson says the Co-op has been considering how best to support this effort for some time.

“We were thrilled to hear that Phase 1 had been funded, and we want to see the full project get completed,” he said.

FEC’s Community Education Grants are funded by unclaimed capital credit dollars. As a not-for-profit electric Co-op, excess margins are allocated to members in the form of capital credits. The Co-op retains those capital credits for a number of years. This practice keeps electric rates lower by reducing the amount the Co-op needs to borrow to fund critical infrastructure projects. As financial conditions allow, they are retired (paid) back to members. Because this can be several years later, some of those capital credit checks go unclaimed because the Co-op doesn’t have a current address for their former members. Once capital credits remain unclaimed for five or more years, Montana law requires FEC to either use that money for educational purposes in their service territory or allocate it to the state’s general fund.

“We do our best to return capital credits to our members, but when we can’t find them, our objective shifts to reinvesting those dollars back into the communities we serve in the most meaningful and impactful way we can,” says Johnson.

Unclaimed capital credit dollars have provided education-related opportunities for thousands of members over the years. Some projects include funding over $100,000 in scholarships to local students attending Montana colleges each year, providing seed money to hire two school resource officers in Flathead County schools in 2019, and providing opportunities for several students to visit Washington D.C. each year.

“These dollars originally came from members of Flathead Electric Co-op, and our Trustees are passionate about reinvesting them back into our community to enhance and expand educational opportunities for our members and their children,” he added. “We are eager to be part of this important project.”