Helping people… it’s what we do. 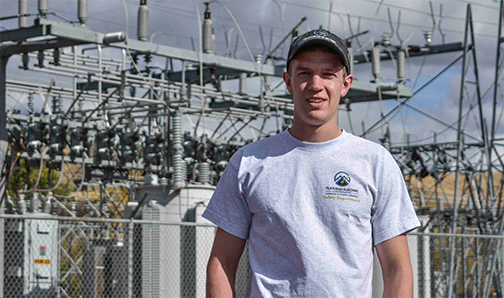 Last summer, the Co-op’s Engineering Intern Sean Young was working in a remote area of FEC’s service territory when a woman emerged from the woods, seemingly out of nowhere. The woman, who was disoriented and injured, had been lost for hours, and there wasn’t a soul in site…except for Young.

“She was in rough shape,” Young says. “I don’t like to think about what might have happened to her if our paths hadn’t crossed. I’m just glad I was in the right place at the right time to help someone.” Young rendered first aid and took additional measures to get the woman the help she needed. Subsequently, he received a “Life Saver Award” from the Montana Electric Cooperatives’ Association (MECA). His plaque reads: “For citizenship, exemplary of our rural cooperative family, in saving the life of another individual. His alert, responsive and selfless action serves as a model for us all.”

Flathead Electric has many extraordinary employees who have gone above and beyond as Good Samaritans and who have received various awards for their efforts, but to them, it’s the reward of helping someone that means the most.

“Helping people is what we do,” says General Manager Mark Johnson. “As a member-focused Cooperative, one of our seven principles is ‘Concern for Community,’ so if we see someone in distress, we respond.”

All operations personnel at the Co-op (and many other employees) are trained in CPR, First Aid, and other lifesaving techniques, because they are often times the first on the scene of an accident or other incident requiring emergency assistance. Johnson says it is inevitable that crews will encounter urgent situations.

“With almost 5,000 miles of power lines and over 1,600 square miles of service territory, linemen and other field workers are out there at all times of day and night, and they’re spread out to cover a lot of ground. Besides restoring power after an outage, monitoring and maintaining equipment, putting in new services, and other standard electrical system-related tasks, Co-op employees are also responding to vehicle versus power pole accidents; to floods or fires where they need to disconnect electrical service; to remove trees that have fallen on power lines, and the list goes on. It is entirely feasible for them to be in a position to help save a life at any given time…and they have.”

A history of helping hands

In 2008, employee Kelly Spooner received the MECA Life Saver Award after performing the Heimlich Maneuver on coworker Ashley Keltner. Ashley was choking and credits Kelly for saving his life.

In 2011, linemen Dave Gilder, John Hahn, and Todd Scholer received the MECA Life Saver Award for their efforts after coming upon a serious accident. The crew provided traffic control so emergency service personnel could access the scene and tend to patients.

In 2011, employees Lori and Royal Osterday received an award from the Department of Natural Resources and Conservation and the Smith Valley Fire Department for discovering, reporting and working to put out a wildfire.

In 2013, employees Chad Bessette, Chuck Johnson, Travis Tennison and Doug Tu received a MECA Life Saver Award for discovering an injured woman. The woman’s doctor said she likely would have died had the men not found her and suppressed her bleeding head wound.

You can help light the way for members in need this season. 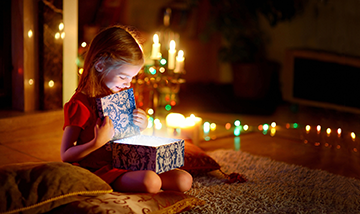 “You can just feel the weight lifting off their shoulders.” That’s how FEC employee Stacie Erickson describes the impact of the Co-op’s “Gift of Light” program, through which members make donations that are then credited to another member’s account. The gifts can remain anonymous, or the Co-op can send a certificate in your name. Erickson helps administer the program, and she says that often times, recipients are overwhelmed with gratitude.

“In one particular situation, an elderly woman just lost her husband and was having health issues herself. She came into the office to tell us that she was unable to pay her bill because she had to spend her money on medication and other necessities for the month. She was so concerned about how she was going to afford her electricity. When she was told not to worry because we were going to apply the ‘Gift of Light,’ she was so grateful that we were all moved to tears by the time she left.”

The “Gift of Light” program is available all year long, but it is especially nice to help light the holiday season. As the receiver of your gift switches on a light on a dark winter’s evening, just imagine the warm glow in their home… and in their heart. 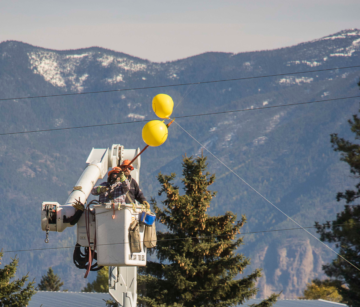 These balloons stuck in a power line could have caused a very serious situation. If the string attached to them had made contact with the wire below, they could have caused an outage. Far worse, given the right conditions, the balloon string could have been energized, and if someone on the ground had touched it, they could have been electrocuted. Luckily, FEC staff noticed, and our crew safely removed the balloons. Remember, NEVER touch something that is in contact with a power line. Call us immediately if you see anything like this. Your safety (and ours) is our top priority. 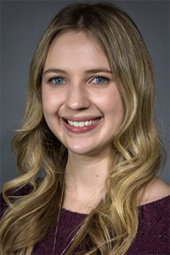 As a third-generation native of the Flathead Valley, I bring a passion for our community and its success. I have a deep gratitude for all this community has done for me, and I am committed to giving back (Urban heads up the Co-op’s annual Court Appointed Special Advocates Campaign, whereby employees “adopt” kids for Christmas by selecting a name and filling the modest wish lists).

My father worked his career in utilities around the northwest and originally sparked my interest in the industry. I have a B.S. in Accounting from Montana State University and enjoy the opportunities I have to apply my interest in accounting to the Cooperative business model. I bring a great deal of energy and passion to my role here.

What’s the best thing about working at Flathead Electric?

The best part about working for Flathead Electric is belonging to an organization that is supportive of our members, community and employees. I love to hear about the incredible and innovative things the Co-op is doing to provide the best service possible. To be a part of that mission while working with Co-op employees is the best part of my job.

My super power would be to survive without needing to sleep. Think of all you could achieve with an extra eight hours the day! 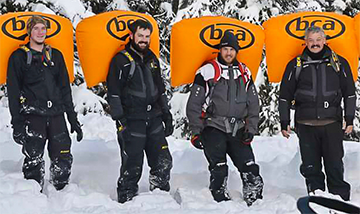 A $1,360 grant from Roundup for Safety was awarded to Swan Mission Search & Rescue (SMSAR), which provides services in the Swan Valley and Northern Lake County areas. President Carol Field says the grant money will be used to purchase transceivers with the latest technology.

“Good equipment is the centerpiece of providing safety,” Field says. “Determining the number of victims buried can be very time consuming with the older beacons, but the new units will immediately tell the rescuer the number, which is very helpful in forming a rapid rescue plan. Time is of the essence in these situations, so we are very grateful to everyone who contributes to the Roundup for Safety program.”

All applications for Roundup for Safety funds should now be submitted online.